vehicle lifts: different types and how to choose the right one

Vehicle lifts can be one of the most important investments you can make for your auto shop or garage. If you don’t have access to a specialist and need to come up with a way to differentiate from the different types of lifts available, let JMC Automotive Equipment help guide you through the learning and selection process.

What is a Vehicle Lift?

Often cited as the most common type of auto lifts available, two post lifts are known for their two incredibly sturdy posts and supportive stabilization arms. Two post lifts are basically a more cost effective alternative for small shops or amateurs just getting into the repair industry. They are also great considering the small footprint they leave in your garage for space saving convenience.

Now, there are different types of two post lifts  as well so it is important to learn the difference between them. For starters, two post lifts  can be considered symmetrical, asymmetrical or versymmetrical.  Symmetrical lifts are easier to identify because their posts face each other directly and the support arms assemblies each hold about 50% of the load. While asymmetrical lifts have swing arms that are not the same length in the front and back and even have a rotated post design. The third option available is the versymmetrical lift and these provide users with the ability to take advantage of being both asymmetric and symmetric simultaneously. Many argue that versymmetrical lifts can be seen as two lifts in one allowing operators to properly accommodate cars, trucks, SUVs and vans all within the same service bay.  Versymmetric two post lifts  are capable of safely lifting all 20 of the most popular service vehicles including: Ford F-Series, Chevy Silverado, Nissan Altima and the GMC Sierra among others. 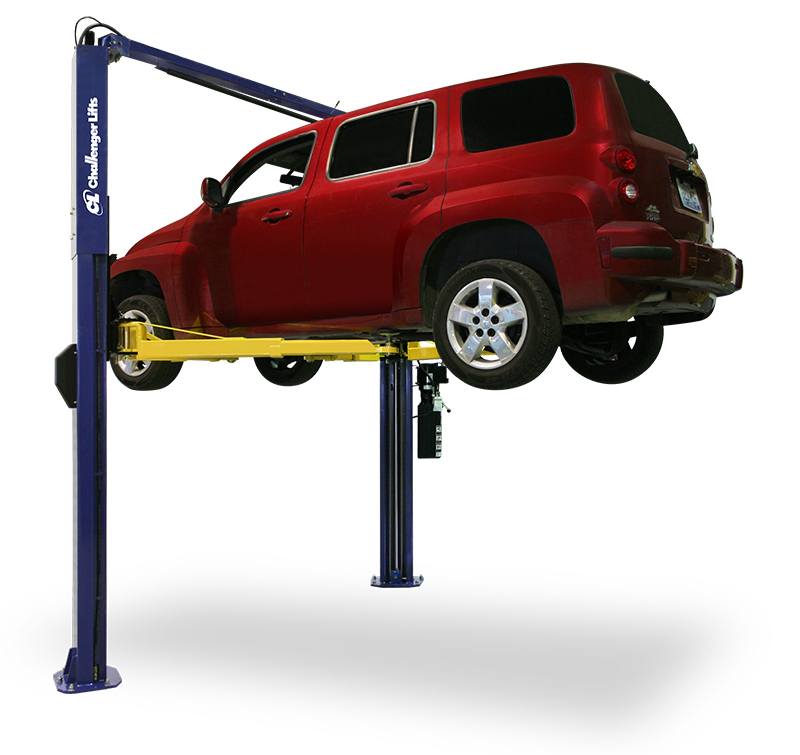 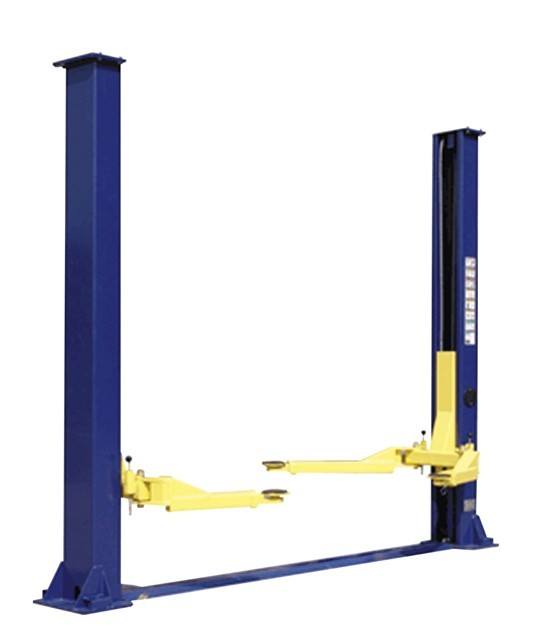 Despite the differences among two post lifts they are all perfect for servicing lighter vehicles and taking up very little space. If you have a bigger garage and are looking to service trucks or larger vehicles, two post lifts might not be the solution. Two post lifts also require more attention to detail in order for them to reach designated vehicle lifting points.

Cost-Effective option for people just getting into the auto shop world.

Time consuming to properly set the four lift points on some vehicles (medium duty trucks for example) because of their kick-up frame sections. 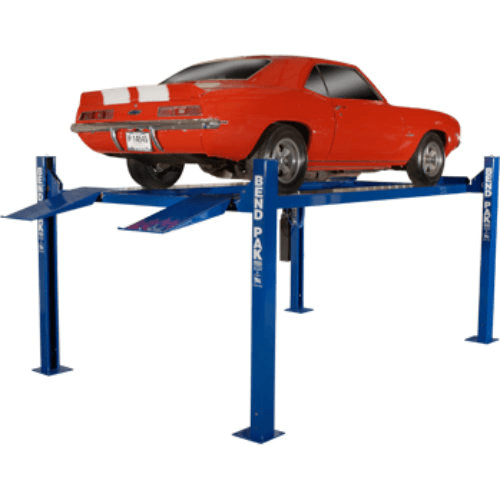 For most heavy vehicle lifting, chances are you will see a four post lift being used. These lifts can hold higher capacities compared to their two post counterparts because of the obvious additional support columns. JMC Automotive Equipment has over 50 different types of four post lifts from companies such as Bendpak, Tuxedo, Hofmann, Dannmar and Challenger Lifts.

Four post lifts are very user friendly and have a wider range of clientele but are especially popular among hobbyists; home garages and any size shop because these lifts don’t require floor anchors. However, as with everything, there are flaws in four post lifts the most obvious being that if you plan to use this type of lift for wheel service, you will also want to invest in sliding bridge jacks to lift said wheels off the runway.

With four post lifts you also get variety as well as lifting capacity which pretty much narrows down your search to a more specific weight group. The first type of four post lift is the open front liftwhich comes without a front cross bar allowing operators to easily enter and exit from beneath the vehicle. This makes front end adjustment fast and trouble free. The second option is the closed front four post lift which means that the front of the lift has the aforementioned bar in the front. It all depends on the type of work you’ll be doing on your vehicles.

Four posts lifts may be a tad pricier but if you’re looking for mobility, capacity and storage, you can’t go wrong with a four post liftand JMC supplies them at the best prices.

Depending on type it may take up more space.

Scissor vehicle lifts is a rather broad term but the word encompasses any type of lift that raises their vehicles with accordion like mechanisms beneath the runways. Depending on the configuration of the cylinders and raising rods, scissor lifts can be described as either drive-on or four arm style lift. Scissor lifts are commonly used as a midlift style hoist and are mainly used for wheel service where lifting your vehicle to great heights is not required.

Scissor Lifts can also be divided into three groups: X type, parallelogram type and pantograph lifts. Like four post lifts, scissor lifts also come in a wide range of heights and capacities to suit the needs of either professional shops or hobbyists. Low rise scissor lifts are known for raising up to 36 inches off the ground, mid-rise lifts can raise between 36 and 48 inches and full rise scissor lifts can go anywhere above that. You might imagine all scissor lifts as small but parallelogram style lifts particularly are known to be some of the heaviest lifters on the market. In fact, scissor lifts exponentially increase in size in higher weight categories.

These lifts are also known for keeping a low profile which makes mounting pretty much hassle free. Very little is required beyond positioning your vehicle over the scissor lift.

Depending on size and capacity, scissor lifts tend to keep a low profile. 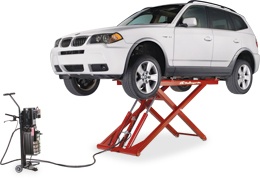 When space is your primary concern you can’t really overlook the idea of a portable car lift. Some of us have limited space in our garages or shops and here is where portable lifts can really be of use. There are many different types of portable lifts because most brands offer their four post lifts, two post lifts and scissor lifts with the option of a portable version. Just be aware that with portable vehicle lifts you trade function for form. That means that due to the space problem, you will end up buying a portable four post lift that might not have all of the functionalities and or gadgets found in the non-portable version of that lift. You might also want to check the capacities on these bad boys before you try and hoist an oversized truck.

The space you can save using a portable lift is unlike no other vehicle lift out there.

It is pretty clear that we lose out on all lot of bells and whistles of other lifts when we choose a portable lift.

For years, in-ground lifts were the norm in almost all large shops and or rental businesses. These allowed vehicles to be hidden under the floor of shops when the car wasn’t in service. They can be either elevator style or scissor lift style and are good choices for keeping the ground clear of clutter.

However, with in-ground lifts the added space also manifests itself in its initial price. If you take a two post lift and compare it to an in-ground lift with similar qualities, chances are the latter’s price is significantly steeper. Not just that but added expenses can also include cutting up and preparing the shop’s concrete for the car lift’s body which can set you back thousands of dollars.

In-ground lifts have also garnered a bad reputation for being harmful to the environment and susceptible to oil leaks.

When a vehicle is not being serviced the elevator (or scissor) like characteristic allows the vehicle to be stored underground.

Clearly there are more disadvantages but the most important (other than cost) is the difficulty to detect oil leaks and because of that the EPA has mandated leak safeguards around all installed in-ground lifts. These lifts are the only ones in the industry that require this oil barrier that in conclusion can add to the cost of ownership.

The idea behind mobile column lifts is actually very simple. Say you want to lift an incredibly large vehicle (a city bus for instance) and are looking for added support. Mobile Column Lifts allow you to add or remove more posts. There are also advanced models that come with wireless communication features which allow one operator to lift platforms simultaneously of up to eight independent post structures.

Currently, mobile column lifts are wheel engaging but also use lifting forks instead of runways to engage the vehicle. These lifts are more for large shops and are rarely seen in garages due to price and the room the added columns take up. 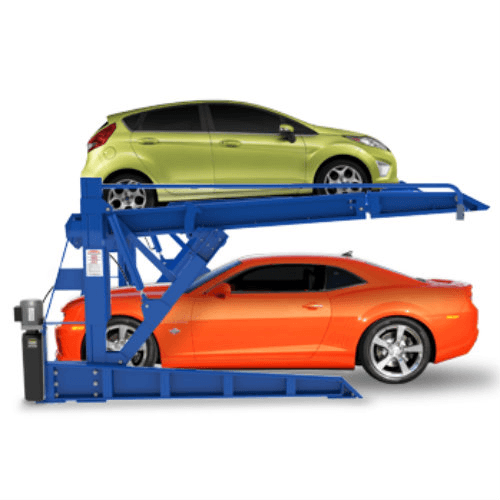 There is a common misconception when it comes to parking lifts and that is that you can use them to work on your vehicles just as well as any other type of lift. This is false. Parking lifts leave smaller footprints but automotive service, maintenance and repair is out of the question. These lifts are strictly for parking.

Parking lifts feature a full drive-on deck as opposed to two runways. The lifting platform is supported by either a single post or two posts and is designed so that another vehicle can be parked beneath it.

A single parking spot can now successfully do the job of two.

There are many benefits that come with purchasing a vehicle lift and trust us, once you do, the fun is just beginning. The first thing you must know before going off to purchase one is make sure you know the space you’d like and need it to take up, budget and which of the types we mentioned in this article better suit your needs as a shop owner or hobbyist. You might also want to ask yourself if in your garage or shop you have enough ceiling height to accommodate a 72 inch undercar height. Do you have concrete that is thick enough? And also, do you want a lift that will require 115 or 220 volt power?

So call some friends over, order a pizza, grab hold of a six-pack and let the selection process begin. Don’t forget to take advantage of JMC Automotive Equipment’s sale season.

For more information on vehicle lifts and the selection process, contact JMC today.