origins of symmetric, asymmetric and versymmetric lifts as told by dannmarr

Back in the 1960s, most of what we know today as vehicle lifts were in-ground lifts that provided technicians and auto-enthusiasts with the possibility of servicing vehicles. The problem with these lifts was the monumental task of installing them (time-consuming and arduous) as well as transporting and re-installing them if their owners were to move. This problem created the need for change, thus, above ground lifts were born.

Origins of the Symmetric Vehicle Lifts

There wasn’t a certain lift known as symmetric at first, instead, these above ground lifts were known as surface lifts and they were praised for their simple installation process and practicality when it came to moving them around.

As time elapsed however, lift manufacturers began to notice that if their lifts would lift vehicles right from the middle, technicians would have a hard time getting out of the vehicles due to the location of the door. More so for a husky technician.

Once this problem was discovered, lift manufacturers were baffled. Two post surface lifts (which at the time were what we today call symmetrical) catered to vans and trucks but not sedans and SUVs, unacceptable.

How to Identify a Symmetrical Lift 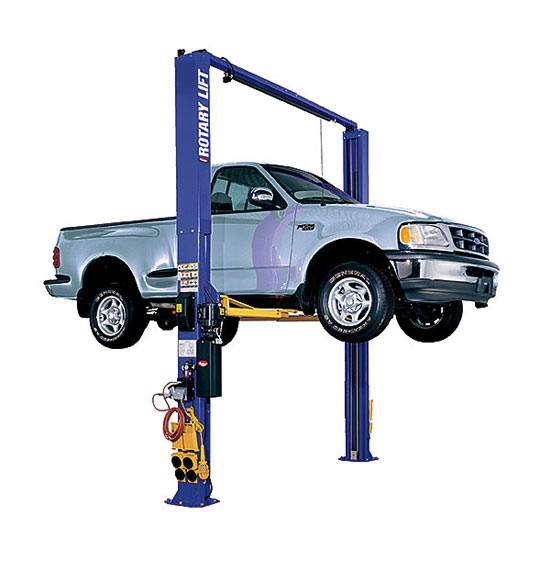 What we know as Asymmetrical Lifts

Identifying this issue called for outside help and this was where America channeled the always eager Europeans for help. Turns out, the Germans were undergoing the same issue and they by no means sought to have all of their techs lose the weight in order to exit their vehicles. Instead, they went and designed a different lift that would allow for mechanics to keep their signature bellies and exit their sedans in an easier manner.

Long story short, whoever came up with the idea for these new lifts his/her design was a lift that had rear arms that were longer than the front arms. These rear arms allowed for the vehicle to sit back further. Far enough so that the doors of all vehicles can be opened without having to repair the doors as well.

Back in America, techs learned about this new design and after analyzing it, decided to make a few changes to improve this near perfect piece of equipment. American techs decided to rotate the columns to face the new load center. This allows for extended door-opening clearance. Asymmetric lifts were born.

We stress the importance of making and learning the distinction between symmetric and asymmetric because if the rear arms aren’t longer than the front, or if the columns aren’t rotated 30 degrees, you’re not getting a TRUE asymmetric lift.

What is a Versymmetric Lift?

For the past couple of years we’ve heard the term versymmetric thrown around by different manufacturers but what is a versymmetrical lift?

You’ve heard of symmetric and asymmetric lifts and you’ve heard their characteristics. Now, it comes naturally to guess that versymmetric sounds dangerously close to versatile and when you put 1 and 1 together you’ll realize that a versymmetric lift is actually a lift that can serve both purposes.

This creation behooves the manufacturer that doesn’t need to build two different pieces of equipment but instead can kill two birds with one stone. Not to say that versymmetric lifts aren’t useful, on the contrary, many manufacturers have taken advantage of this technology to build sturdy pieces of equipment that techs enjoy servicing vehicles on. One example of a high-selling two post lift using the versymmetric technology is Challenger Lifts’ E10 two post lift.

That might have not been the most interesting of stories but it vaguely explains how most problems are the catalysts that create changes that affect our everyday lives. As shop owners we now see how that problem brought about the invention of symmetric lifts and how that invention created a new problem to which a solution was shortly invented. Such problems and resolutions added variety to auto repair shops.

We’d like to give credit to the guys over at Dannmar that provided us with the insight, anecdote and information on the history of the three most common designs of two post lifts you see today.